The Culture of Amateur Paranormal Researchers

In the 21st century, reality television and the Internet have fed public interest in ghosts, UFOs, cryptozoology and other unusual phenomena. By 2010, roughly 2000 amateur research and investigation groups formed in the U.S.—ghost hunters, Bigfoot chasers and UFO researchers, using an array of (supposedly) scientific equipment and methods to prove the existence of the paranormal.
American culture’s honorific regard for science, coupled with the public’s unfamiliarity with scientific methods, created a niche for self-styled paranormal experts to achieve national renown without scientific training or credentials. The author provides a comprehensive examination of the ideas, missions and methods promoted by these passionate amateurs.

Sharon A. Hill is a geologist, writer and researcher of topics related to science, society, and the paranormal. She lives in Harrisburg, Pennsylvania.

2. The Paranormal in Popular Culture 27

4. Seeking Monsters: Bigfoot and Other Cryptids 56

9. ARIG Portrayal of Science to the Public 132

Conclusion: Beyond the Veil 201

“[Hill has] found that reports of paranormal phenomena are worthy of serious research…Hill encourages new and better approaches to paranormal field research and investigation…offers some encouragement in digging deeper, past what the popular media presents as paranormal investigation, discoveries become more illuminating”—ProtoView 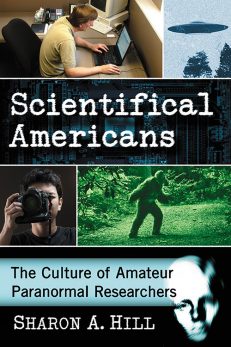