A Tour of Dark Places in the American Conscious

For many years, conspiracy theories have been among the most popular story elements in Hollywood films. According to the “conspiracy culture,” Government, Big Business, the Church, even aliens—all of which, bundled together, comprise the ubiquitous “Them”—are concealing some of the biggest secrets in American and world history. From The Manchurian Candidate (1962) to JFK (1991), The Matrix (1999) to The Da Vinci Code (2006), this decade-by-decade history explores our fascination with paranoia. The work paints a vivid picture of several of the more prevalent conspiracy theories and the entertainment they have inspired, not only in theatrical films but also in such television series as The X-Files, Lost and V.

Barna William Donovan is a professor of communications and media studies at Saint Peter’s, the Jesuit College of New Jersey. His articles, columns, and reviews on film and popular culture have been published in academic journals such as Communication Annual and Men and Masculinities as well as various newspapers. 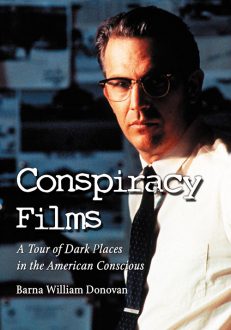