Francis Tukey and the Invention of Modern Crime Fighting

The Boston Police Department was formed by a man who had twice failed in business, ran a bar in the poorest district of Boston, and was charged with two assaults. When Francis Tukey became City Marshal in 1846, he faced off against some of the most notorious criminals of the time. Under Tukey’s leadership, the police were known for their coordinated “descents” on gamblers, rumrunners and prostitutes.
This book aims to recount the story of the formation of the Boston Police Department, featuring many of the department’s earliest cases and crises. Significant tales include the conflict following the Fugitive Slave Act of 1850, when Tukey and his officers avoided enforcing the law, even helping enslaved people further escape. Also covered are the department’s dealings with Irish refugees and the Cholera epidemic of 1849.

Timothy B. Riordan is an historical archaeologist and historian who, for 30 years, was the Chief Archaeologist at St. Mary’s City, an outdoor museum of archaeology and history in Maryland. He has written numerous professional articles and monographs. His other books include a history of Maryland in the English Civil War, 1642-1650 and a biography of Francis Tumblety, 19th-century quack doctor and one time Jack the Ripper suspect.

Preface 1
Introduction 3
1. “A dirty, troublesome, brutish little whelp” 9
2. “But is he capable, assiduous, fearless in the discharge of his duty?” 29
3. “A gang of daring villains broke and entered the store on the corner of Washington and Milk streets” 49
4. “His articles have appeared too savage and fiendish, too much like the ravings of a man stark mad” 68
5. “Who are truly in a pitiable condition, being stowed into garrets and cellars” 87
6. “There has probably never been a criminal trial … which called for such an immense amount of varied learning” 109
7. “Some men think … that when a man becomes unfit for anything else, he is just fitted for a Policeman” 136
8. “After you left the City Hall, others came, with whom I had but little sympathy” 170
9. “Emigrants from Every State in the Union, and all the Nations and tribes of the Earth” 188
Chapter Notes 205
References Cited 229
Index 233 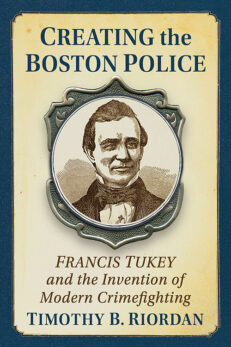 You're viewing: Creating the Boston Police $29.95
Add to cart