Born into one of 19th century Europe’s more powerful families, Archduchess Marie Valerie was the favorite daughter of Austria’s Emperor Franz Joseph and Empress Elisabeth. Determined to marry for love, in 1890 she wed her cousin, Franz Salvator of Tuscany and bore him 10 children. The dashing Archduke was not faithful. His affair with Stephanie Richter, a young, middle-class Jewish woman with a knack for flattering powerful men, led to an illegitimate child, a royal title of her own and a career as a double-agent in the prelude to World War II. Princess Stephanie von Hohenlohe became vital to Adolf Hitler, betraying the German Jews, the British government, and her home country of Austria—until Hitler betrayed her, leaving her without allies or protectors.

Jennifer Bowers Bahney is an award-winning journalist with a master’s degree from Northwestern University and a BA from Smith College. Her book Stealing Sisi’s Star, was a finalist for the 2016 Ohioana Book Award in Nonfiction. 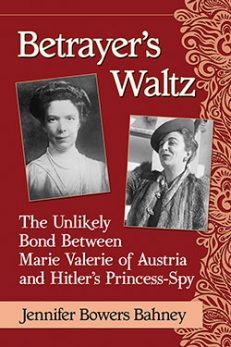