This collection chronicles the most mysterious, bizarre and often overlooked homicides in Louisiana history. Drawing on contemporary records and, where available, the recollections of those who provide a coherent version of the facts, these mesmerizing tales detail some of the more gruesome episodes: the rise of the first Mafia godfather in the United States; the murder of two New Orleans police chiefs; the brutal murder of a famous New Orleans madam; the story of a respectable young woman who “accidentally” poisoned her younger sister and is a suspect in other family deaths; the ritual killing of blacks in southwestern Louisiana and eastern Texas; the mysterious death of a young housewife which still generates debate; and the demise of a local celebrity who believed in his own invincibility.

Alan G. Gauthreaux is a crime, ethnic and military historian who teaches at Nunez Community College and Southern University of New Orleans. His previous works may be found in America’s Civil War, Civil War Illustrated and Globe Communications. He lives in Kenner, Louisiana.

D.G. Hippensteel is a full-time criminal justice faculty member at Delgado Community College in New Orleans. He is a Louisiana state certified peace officer having served with the Orleans Parish Criminal Sheriff’s Office and the reserve division for the Jefferson Parish Sheriff’s Office. A decorated Vietnam combat veteran, he lives in Marrero, Louisiana. 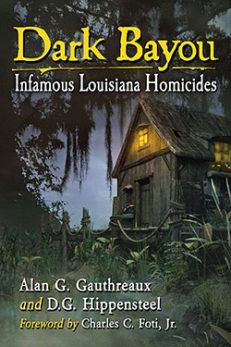