The Up Stairs Lounge Arson

On June 24, 1973, a fire in a New Orleans gay bar killed 32 people. This still stands as the deadliest fire in the city’s history. Though arson was suspected, and though the police identified a likely culprit, no arrest was ever made. Additionally, government and religious leaders who normally would have provided moral leadership at a time of crisis were either silent or were openly disdainful of the dead, most of whom were gay men. Based upon review of hundreds of primary and secondary sources, including contemporary news accounts, interviews with former patrons of the lounge, and the extensive documentary trail left behind by the criminal investigations, The Up Stairs Lounge Arson tells the story of who used to go to this bar, what happened on the day of the fire, what course the investigations took, why an arrest was never made, and what the lasting effects of the fire have been.

Clayton Delery is a member of the faculty of the Louisiana School for Math, Science, and the Arts in Natchitoches, Louisiana.

Acknowledgments ix
Preface 1
A Note on Language 5
I. Beer, Prayer and Nellydrama: The Story of the Up Stairs Lounge 7
II. Nineteen Minutes of Hell: The Fire at the Up Stairs Lounge 34
III. Thieves, Queers and Fairy Carpetbaggers: How New Orleans Responded 56
IV. ”Nothing there”: The Investigation of the NOFD and the Coroner’s Office 84
V. Passive Voice: The Police Investigation 91
VI. ”A terrible cross”: The Fire Marshal Investigation and the Death of Rodger Nunez 115
VII. Southern Stonewall? Or Rehearsal for a Plague? The Social and Political Legacies of the Fire 139
Afterword. ”Anecdote of the Jar”: Final Reflections 167
Notes 179
Bibliography 189
Index 199

Book of the Year—The Louisiana Endowment for the Humanities 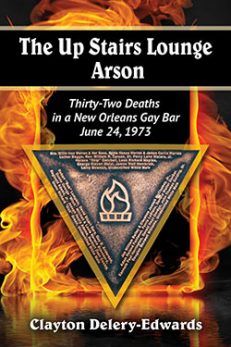 You're viewing: The Up Stairs Lounge Arson $19.99
Add to cart