Jessie Levy and Bess Robbins in the Courtroom

In the early 1930s women practicing criminal law were often held in the same low regard as the clients they served. When a corrupt prosecutor was determined to send as many of the notorious John Dillinger gang to death row as possible, female attorneys Jessie Levy and Bess Robbins rose to the challenge. They skillfully represented six of the gang members, a number far greater than any of their male counterparts. And yet, their story of deals gone bad, wrongful convictions and success against the odds has all but vanished from history. The recent discovery of interviews, personal correspondence, and court transcripts—a treasure trove untouched for over 80 years—forms the basis for this book, which traces the careers of Jessie Levy, Bess Robbins and the John Dillinger gang in detail for the first time.

• “Meticulously researched and compellingly told, Defending the Dillinger Gang provides us a slice of history that has for too long gone unrevealed. The characters are rich—female attorneys battling misogyny, outlaws who would become legendary—and D.M. Testa brings them to vibrant life, from the criminal culture of characters like John Dillinger to the courtroom wrangling of the legal protagonists and antagonists. It can be cliché to say that a book is history that reads like the best of fiction, but in D.M. Testa’s hands, that is the case with Defending the Dillinger Gang.”—Gary Craig, author of Seven Million: A Cop, A Priest, a Soldier for the IRA and the Still-Unsolved Rochester Brink’s Heist

• “D.M. Testa encapsulated a forgotten period in history and brought Jessie Levy and Bess Robbins back from the veil that time itself created. Two women that were far ahead of their time, and not afraid to outwit men in the same field as their own. The complexity of the corruption involved in the handling of the Dillinger gang in the court system is mind boggling, as the author has so in adeptly researched. Both Levy and Robbins, with scant means or promise of monetary gain, believed that even these men and women deserved a fair shake from the justice system.”—Lori Hyde, co-author Chasing Dillinger: Police Captain Matt Leach, J. Edgar Hoover and the Rivalry to Capture Public Enemy No. 1 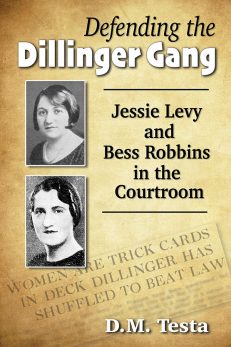 You're viewing: Defending the Dillinger Gang $25.00
Add to cart