Have You Seen This Person?

Each year, hundreds of thousands of people are reported missing in the United States alone. The majority of those who disappear turn up within a week, but a small percentage are never heard from again.

Why did a Swedish teenager on an Australian adventure mail a cryptic letter to his family in Stockholm before disappearing forever? What became of a young woman whose car was found crashed and abandoned off a cliffside in Whatcom County, Washington? How can an individual vanish without a trace in a world so connected and monitored?

This book explores ten unsolved missing persons cases from around the world, from a 12-year-old British boy who purchased a one-way ticket to London King’s Cross never to return, to an American traveler who walked into the Himalayas not to be seen again. Included are exclusive interviews, statistical information and a case-by-case analysis of the most common and probable theories for each disappearance.

LJ Roberts is a true crime blogger from the northeast of England, publishing weekly true crime articles for the Generation Why podcast. 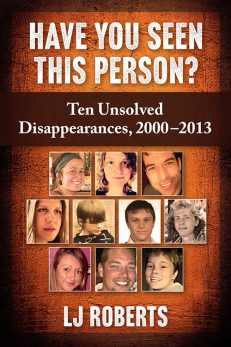