Spiritualism in the American Civil War

America’s Civil War took a dreadful toll on human lives, and the emotional repercussions were exacerbated by tales of battlefield atrocities, improper burials and by the lack of news that many received about the fate of their loved ones. Amidst widespread religious doubt and social skepticism, spiritualism—the belief that the spirits of the dead existed and could communicate with the living—filled a psychological void by providing a pathway towards closure during a time of mourning, and by promising an eternal reunion in the afterlife regardless of earthly sins.
Primary research, including 55 months of the weekly spiritual newspaper, Banner of Light and records of hundreds of soldiers’ and family members’ spirit messages, reveals unique insights into battlefield deaths, the transition to spirit life, and the motivations prompting ethereal communications. This book focuses extensively on Spiritualism’s religious, political, and commercial activities during the war years, as well as the controversies surrounding the faith, strengthening the connection between ante- and postbellum studies of Spiritualism.

R. Gregory Lande is an adult, forensic and addiction trained psychiatrist in Orlando, Florida, a retired U.S. Army medical officer and an independent scholar whose interest in historical research focuses on the human side of America’s Civil War era. 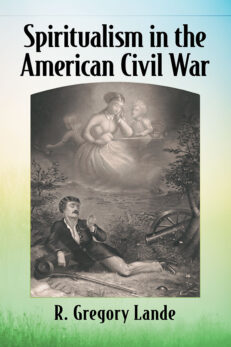 You're viewing: Spiritualism in the American Civil War $39.95
Add to cart