Words of a Monster

Decades before the coining of the term “serial killer,” H.H. Holmes murdered dozens of people in his now-infamous Chicago “Murder Castle.” In his own autobiography, Holmes struggled to define himself in the language of the late nineteenth century. As the “first”—or, as he labeled himself, “The Greatest Criminal of the Age”—he had no one to compare himself to, and no ready-made biographical structure to follow. Holmes was thus nearly able to invent himself from scratch. This book uses Holmes’ writings and confessions to inspect how the Arch Fiend represented himself. Although the legitimacy of Holmes’ personal accounts have been called into question, his biography mirrors the narrative structure of the true crime genre that emerged decades after his death.

Rebecca Frost is an independent scholar and freelancer. She lives in L’Anse, Michigan.

Part I: Introducing H.H. Holmes 9
One. Separating the Man from the Myth 11
Two. The Start of a Legend 31

Part IV: Holmes Confesses 27 Murders 191
Twelve. The Transformation from Innocent to Confessor 196
Thirteen. Details Revealed and Concealed 205
Fourteen. Those Hurt the Most 225 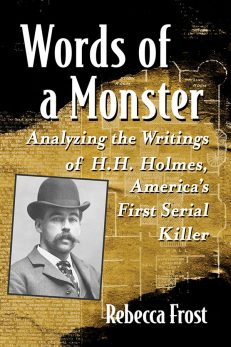