A Domestic Violence Survivor Uncovers the Truth About Her Abuser

This memoir is an inspirational yet harrowing story of a domestic violence victim’s search for the truth about her marriage. Twenty-one-year-old Sarah Doucette married a charming, gregarious and attentive man. Six years later, she left the marriage, lucky to be alive. Suffering from PTSD and dissociation after years of physical and emotional abuse, Sarah could barely remember the details of her marriage. After her ex-husband’s death by suicide, Sarah set out to interview those who knew him, piecing together the destructive patterns in his life and how it affected her even years later.

This book is a cautionary tale about trusting one’s inner voice in order to leave an abusive relationship. It is a story of domestic abuse survival that can help others survive their trauma while outlining the many kinds of domestic abuse.

Sarah Doucette works as a financial advisor and donates her time to help others find financial freedom. She lives in Topsham, Maine. 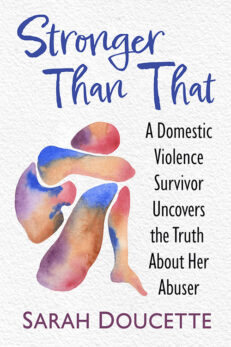