Case Histories from an Enforcement Attorney

By recounting actual court cases, this book examines the multi-billion-dollar elder fraud industry, the special vulnerabilities of those it targets, and the ease and frequency with which it obtains hundreds of thousands of dollars per victim. It also reveals successful strategies for combating that industry and the important contributions to that effort by concerned bankers, doctors, reporters and others in the private sector.
The cases reveal an increasingly sophisticated global industry that targets each victim with a series of repeat “hits.” This tactic—criminals call it “reloading”—sets the elder fraud industry apart from groups that defraud younger individuals. Twelve key age-related fraud vulnerabilities are illustrated in the cases. So, too, are the scammers’ skills in mapping their target’s unique combination of vulnerabilities and then tailoring their narratives to exploit each one. Most of the cases highlight actual victims, scam artists or fraud fighters. Their individual stories range from inspiring and sometimes comical to frustrating and deeply disturbing. Readers with aging parents, law enforcement officials, medical professionals, members of the financial industry and others who work with older adults will find it particularly useful.

David Neil Kirkman is a former enforcement attorney with the North Carolina Department of Justice’s Consumer Protection Division. During his three decades there, he battled a growing and increasingly sophisticated network of US-based and overseas fraud groups that target seniors with an assortment of scams. He lives in Chapel Hill, North Carolina.

Part One. Before We Even Called It “Elder Fraud”

4. Sweepstakes and Lottery Scams: The Cases of Mrs. B and Mrs. D 27

Part Two. Will, Bill and the War Against the Home Repair Fraud Gang

7. Without Something Else, These Cases Were Going to Be Hell to Prosecute 45

27. Whack-a-Mole Leads to the “Means and Instrumentalities” Approach 132

35. What Are Scientists Saying About All This? 197

• “Quite frankly, I was not anticipating the book I read. I thought I would be treated to analytical, fact-filled case studies, with a foray or two into complicated legal issues. To my delight, from the very beginning I was captured by well-written narratives seasoned with vivid descriptive passages. As I read, I felt as if I were actually present with you on your investigative trips and at the legal planning sessions. The variety of episodes held my interest as I read, and I enjoyed the legal details almost as much as I enjoyed the stories you told.”—Charles Cornwell, English professor (retired), Davidson College

• “Kirkman provides engaging stories from his work on elder fraud cases. Elder Fraud Wars is a helpful resource for Elder Law practitioners. Kirkman’s writing style brings the issues to life and provides detailed case studies that are rarely found in legal literature. While Kirkman provides data to support his observations, the real value of the book is in the journalistic accounts that give a fuller picture of how elder fraud occurs and the complicated reasons as to why it is often successful.”—NC Bar Blog 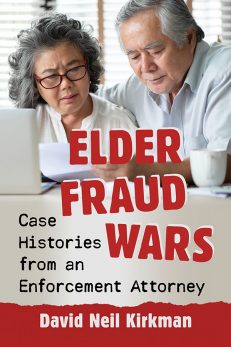