The Electric Corset and Other Victorian Miracles

Medical Devices and Treatments from the Golden Age of Quackery

Through the Victorian and Edwardian eras, various health movements emerged in the transition to the modern age of scientific medicine. Strange medical devices and quack cures were pushed, often using crude remedies based on simplistic beliefs and the placebo effect. Currently, some of these treatments appear absurd, even cruel. Because some were properly used as appropriate therapies, it is difficult to label them altogether as bogus.

This book takes a thorough look at unconventional medical gadgets, as well as the strange devices and therapies used by both fringe and legitimate healers, and places them in the perspective of modern medicine. The author argues that quackery should not be defined by the ineffectiveness of a therapy, but rather be based on the fraudulent intent of the people who pushed dishonest and deceptive remedies.

Jeremy Agnew, a biomedical electronics consultant, holds a PhD in engineering and has been involved in the design and manufacture of medical devices for more than 30 years. He lives in Colorado Springs, Colorado, and has written several books on the Old West.

One. Time for a Change 7

Six. The Mysteries of Electricity 99

Seven. Messing with the Mind 120

Nine. Reshaping the Outside 157

Twelve. The Promise of Restored Youth 215

Thirteen. The Power of Radioactivity 235 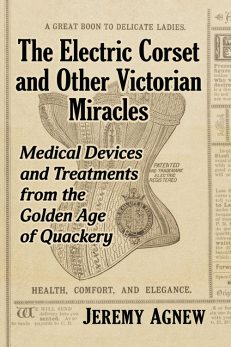 You're viewing: The Electric Corset and Other Victorian Miracles $29.95
Add to cart