A Queer Memoir of San Francisco

A Generation X transgender woman, Sherilyn Connelly came out of the closet in 1999. Her own identity still emerging, she had stumbled into a difficult, stifling relationship. Also, her employment at a tech company ceased when the dot-com bubble burst. It was a goth boy from Bolinas that first took her shopping for make-up, and the San Francisco goth scene became her respite.
This wickedly eye-opening memoir reveals how Connelly dealt with a toxic partner and found her voice as a woman. A longtime cinephile, it tells how she became a writer, rekindled a love for cult films and horror conventions, and learned “the secret to becoming a star.” Her remembrances are also a tale of a bygone era of sex, music and San Francisco and its darkened underworld of goth strays—her literate vampires and beautiful ghosts.

Sherilyn Connelly is a San Francisco-based writer and librarian.

• “Sherilyn Connelly is a brazen, brilliant, and brave anti-hero who suffers no misogynistic fools, and her book Beautiful Ghosts is a metropolitan fairytale where the scares are dangerously real but the saving magic dust is all her. Her self-acceptance comes at a calculated rate fueled by Connelly’s interpretation of disreputable blondes like Courtney Love until she herself becomes not the marginal villain that so-often inspired Connelly, but indeed, our own villainous heroine of the marginal space populated by women, mythical or ordinary, who leave abusers, who don’t hide their snappy brilliant selves, who find that living and yelling their truth is how life becomes legend.”—Shar Rednour, co-director of Sugar High Glitter City

• “In Beautiful Ghosts, Sherilyn Connelly serves as a tour guide through San Francisco in the first part of the current century, letting her avenues and experiences paint a tableau of her life. Her tale is refreshing, breezy, and a great read that stands apart from many other trans tales. Get it, read it, and enjoy it.”—Gwendolyn Ann Smith, columnist, “Transmissions” 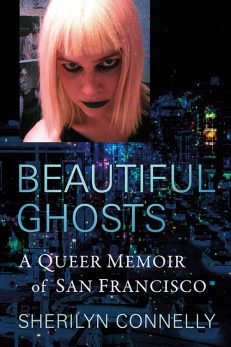