As the Great Depression hit, Penn State College was cash-strapped and dilapidated. Cuts to athletic scholarships left the football program a shambles and the school a last resort for many students. In 1937, underfunded state police, fighting a losing battle against striking miners and steel workers in Johnstown, called in the National Guard.
There were not enough police to cover the state, and it showed. Then someone started killing young women in the area. Between November 1938 and May 1940, Rachel Taylor, Margaret Martin and Faye Gates were abducted and sexually assaulted, their bodies dumped within 50 miles of the college.
As the school grew into Pennsylvania State University and the Nittany Lions became a world-class team, two demoralized police agencies were merged, forming the precursor of the Pennsylvania State Police. Gates’s murderer was captured and convicted. The killer(s) of Taylor and Martin, however, have gone unidentified to this day. 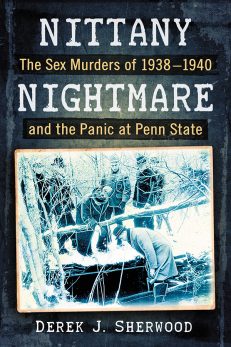