Murder, Media and the Poison Panic in America

In the latter half of the 1800s, widespread suspicion and anxiety emerged when wives of all ages and social status were accused of killing their husbands with poison. However, what seemed like a massive spike in murderous wives across the United Kingdom and United States may not have been a spike at all, but rather a poison panic caused by hungry newspapers and mass hysteria.
This work explores several high-profile cases of women on trial for murdering their husbands with poison. Lust, money and power were often central to the accusations, and the sensational news coverage set off a century-long witch hunt. No woman was safe from suspicion during this untold chapter in the history of crime.

Christine Seifert, PhD, is a professor of communication at Westminster College in Salt Lake City, Utah, where she teaches classes in rhetoric, professional writing, communication strategy, and history/philosophy of science. She is the author of one novel and three nonfiction books, and has written articles for Harvard Business Review, Bitch Magazine, and The Atavist, among others. 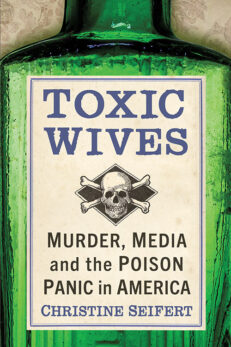