King of the Bootleggers

A Biography of George Remus

As a pharmacist turned lawyer turned master prohibition era bootlegger, George Remus is now remembered as one of the most notorious figures of the American prohibition. Even though he was a lifelong teetotaler, Remus built one of the nation’s largest illegal liquor empires with little regard to disguises or secrecy. This biography tells the complete story of Remus’ private life and public persona, focusing especially on the turbulent rise and fall of his bootlegging kingdom. It begins with an overview of Remus’ early life and careers in pharmacy and law, and covers his bootlegging career, including his overwhelmingly successful early business ventures, his 1922 bootlegging conviction, his murder of wife Imogene (after she had a well-publicized affair with prohibition agent Franklin Dodge), and Remus’ subsequent trial for her murder.

William A. Cook is the author of numerous books, including 11 on baseball history, and has appeared in productions on ESPN2 and the MLB Network. A former health care administrator and township councilman in North Brunswick, New Jersey, he resides in Manalapan, New Jersey. 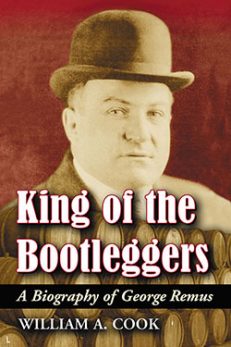 You're viewing: King of the Bootleggers $25.00
Add to cart