Also called “resurrectionists,” body snatchers, were careful not to take anything from the grave but the body—stealing only the corpse was not considered a felony since the courts had already said that a dead body had no owner. (“Burking”—i.e., murder—was the alternative method of supplying “stiffs” to medical schools; it is covered here as well). This book recounts the practice of grave robbing for the medical education of American medical students and physicians during the late 1700s and 1800s in the US, why body snatching came about and how disinterment was done, and presents information on: efforts to prevent the practice, a group of professional grave robbers, and the European experience.

Suzanne M. Shultz, has published works on the history of medicine and Three Mile Island. She is the director of Library Services of Philip A. Hoover, M.D. Library at WellSpan Health at York Hospital. She lives in Harrisburg, Pennsylvania. 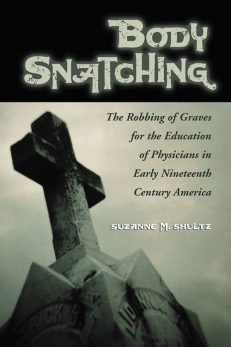