This book reveals the life of R. Clay Crawford, his dreams, his schemes, his successes and his failures, as he launched himself into many of the most turbulent episodes of 19th century United States history. Like everyone, he was born with a family history, not just genetic but also cultural determinants; this book reveals the influences on his behavior inherited from his father and his grandfathers. He likewise passed on to his children a model, not just genetic but cultural. Even so, Clay Crawford’s story is not just a family affair. He was a “self-made man” living in an age when such was thought to be a national asset—and thus stands out as a warning that the worship of the “self-made man” may produce more rogues than Rockefellers.

Lewis A. Lawson taught American literature at the University of Maryland from 1963 to 1997, when he became Professor Emeritus. He lives in University Park, Maryland.

by Lewis A. Lawson

“Provides interesting insights into the life of an American rogue who used the war to satisfy his need for status and wealth…recommended”—Civil War News. 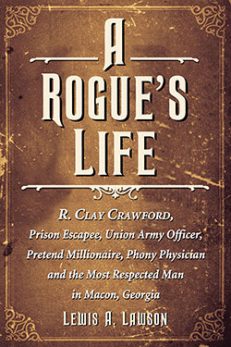