The Life and Deaths of Cyril Wecht

For six decades, Pittsburgh-based forensic scientist Cyril Wecht has been an outspoken authority when horrible things happen to everyday people—murders, childhood deaths, tragic accidents and police brutality. His expertise and testimony have been called upon in high-profile cases, including the deaths of John F. Kennedy, Robert F. Kennedy, Martin Luther King, Jr., Elvis Presley, JonBenét Ramsey, Laci Peterson and others. As a criminal defendant, in 1979, he was acquitted on charges of personally profiting from his office as Allegheny County Coroner; a federal public corruption charge was dismissed in 2008. Both cases, his attorneys argued, were politically motivated. Wecht’s memoir describes his work on famous cases, his life in the public eye and his legal battles with determined and powerful authorities, from his hometown DA to a U.S. Attorney and the FBI.

Cyril H. Wecht M.D., J.D., is an internationally acclaimed forensic pathologist, attorney and medical-legal consultant who has become famous for consulting on deaths with a high media profile. His expertise has been called upon in cases involving John F. Kennedy, Robert F. Kennedy, Martin Luther King, Jr., Elvis Presley, JonBenét Ramsey, Laci Peterson and Kurt Cobain, the fatal stabbings of the family of Dr. Jeffrey MacDonald, the O.J. Simpson slayings, and the Waco Branch Davidian fire, among many others.

Jeff Sewald is an award-winning writer and filmmaker who specializes in defining the cultural significance of people, places, things and events. His films include Gridiron & Steel, a documentary focusing on the spiritual relationship that exists between the sport of football and the people of southwestern Pennsylvania; Peter Matthiessen: No Boundaries, about the legendary author and environmentalist; and We Knew What We Had: The Greatest Jazz Story Never Told, which chronicles the history and significance of jazz music in his hometown of Pittsburgh.

Acknowledgments vii
Preface 1
Introduction 5
My Hometown 9
Lessons in Malevolence 14
Federal Trial Part I: Choose a Victim, Invent a Crime 24
“Be a doctor and you will be your own boss” 37
Love and Early Skirmishes 49
The Golden Rule: “he who has the gold, rules” 62
Federal Trial Part II: Mad Dogs at the Door 76
To Sin by Silence: The Assassinations of JFK and RFK 90
Media Darling 115
Federal Trial Part III: The Aftermath 130
I Did It My Way 144
The Cyril H. Wecht Institute of Forensic Science and Law 155
Witness for Truth: Casework 160
Contributors 215
The Authors in Brief 220
Other Books by Cyril Wecht 221
Index 223

• “Cyril couldn’t be intimidated if you faced him with a Sherman tank.”—F. Lee Bailey

• “I respect Cyril enormously because he stays out there in the public eye and keeps saying what he believes. He’s a straight shooter.”—Oliver Stone

• “Cyril Wecht is an old warrior. When I had dinner with him not too long ago, I could still see bright flashes of the curiosity, the indignation and the fire that have propelled his legendary career for five decades.”—Alec Baldwin

• “Cyril is a no-nonsense, straight-talking expert. He’s a renowned scientist who has little patience for rigmarole or politics. He speaks to the forensic truth of what his investigations and examinations reveal.”—Geraldo Rivera

• “Cyril Wecht has tremendous credibility. He is not a ‘witness for hire.’ He’s a witness for the truth.”—Alan Dershowitz 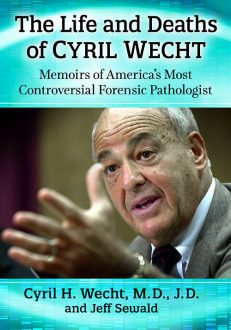 You're viewing: The Life and Deaths of Cyril Wecht $29.95
Add to cart