Eliot Ness and the Untouchables

The Historical Reality and the Film and Television Depictions, 2d ed.

Lawman Eliot Ness has been transformed into legend by the films and television programs that depicted the war he and his “Untouchables” waged against Al Capone and the mobsters of Prohibition-era Chicago. Published by McFarland in 2000, the first edition of this volume analyzed both Ness the person and Ness the myth. This updated and expanded second edition is enhanced by information gathered through interviews with members of the original casts of the television and film versions of The Untouchables. Also included is new material on the historical Frank Nitti and “The Mad Butcher of Kingsbury Run,” along with several gangsters whom Ness never actually encountered except in his media portrayals, among them Mad Dog Coll and Dutch Schultz. The author concludes by evaluating the life and accomplishments of Eliot Ness, and his impact as a cultural icon.

Kenneth Tucker is professor emeritus of English at Murray State University. He has written previously on a variety of literary figures and on the performing arts. He lives in Murray, Kentucky.

“[The author] separates fact and fiction in a study of the crime-fighting federal agent”—Burlington County Times. 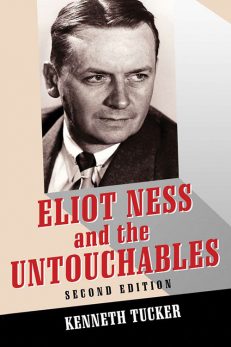 You're viewing: Eliot Ness and the Untouchables $29.95
Add to cart