The Infamous Burke and Hare

Body snatchers and grave robbers were the stuff of Victorian lore, but two real-life culprits took the crimes out of shadowy cemeteries and into criminal court. William Burke and William Hare aided Scottish surgeons competing for anatomical breakthroughs by experimenting on human corpses. As the duo evolved from petty theft to premeditated murder, they unwittingly brought attention to the medical practices of the era, leading to Burke’s death by hanging. This account not only explores the work of the resurrectionists, it reflects the nature of serial killers, 1820s criminal law, and Edinburgh’s early role as a seat of European medical research. Readers interested in the legal aspects of these crimes will find the trial testimony included to be a valuable resource.

R. Michael Gordon is the author of several books, and has written extensively on Victorian London and the Ripper phenomenon. He lives in Long Beach, California. 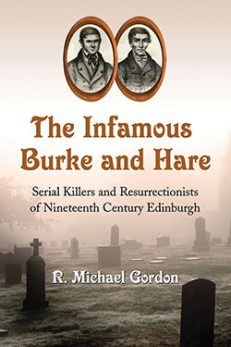 You're viewing: The Infamous Burke and Hare $19.99
Add to cart