The polygraph, most commonly known as the lie detector, was created and refined by academics in university settings with support from a few early police agencies. This work is a history of the machine, from the experimental work of the late 1800s that led directly to its creation, until the present.
It covers early lie detectors and their inventors from the 1860s to the early 1920s, their use by the police and other law enforcement agencies in the 1930s and their use in Cold War America in the 1940s and 1950s. It then discusses the government’s use of the polygraph in the 1960s, the PSE, a new take on the old polygraph, and private businesses’ reliance on the polygraph in the 1970s and the government’s increasing reluctance to use it in the 1980s. A chapter on new ideas and uses for the polygraph in the 1990s and after concludes the book.

Cultural historian Kerry Segrave is the author of dozens of books on such diverse topics as drive-in theaters, ticket-scalping, lie detectors, jukeboxes, smoking and shoplifting. He lives in British Columbia. 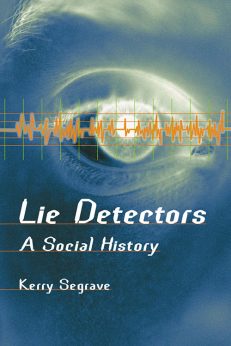