After fifty years as a forensic pathologist, Dr. Cyril Wecht has one case that still keeps him up at night. Since the day that President John F. Kennedy was murdered in Dallas, Dr. Wecht has earned his reputation as one of the foremost skeptics of the U.S. government’s official answer to the death of the 35th president. Dr. Wecht firmly believes that it was not Lee Harvey Oswald who was responsible for the president’s death, but rogue elements within our own government.
Co-authored by true crime writer Dawna Kaufmann, this book rehashes Dr. Wecht’s decades-long experience with the JFK case in one highly detailed and comprehensive volume. Through the unique perspective of a career coroner, it approaches importantly—the autopsy, with an expertly discerning eye, identifying the details (and often lack thereof) which Dr. Wecht finds particularly dubious. The authors also discuss the murder of Lee Harvey Oswald, the findings of the Warren Commission, Jack Ruby and the shocking revelations about the assassination made in the years since.

Cyril H. Wecht M.D., J.D., is an internationally acclaimed forensic pathologist, attorney and medical-legal consultant famous for consulting on deaths with a high media profile. His expertise has been called upon in cases involving John F. Kennedy, Robert F. Kennedy, Martin Luther King, Jr., Elvis Presley, JonBenét Ramsey, Laci Peterson and Kurt Cobain, the fatal stabbings of the family of Dr. Jeffrey MacDonald, the O.J. Simpson slayings, and the Waco Branch Davidian fire, among many others.

Dawna Kaufmann is an investigative reporter for several publications and has worked on some of the highest-profile trials and sex crime cases of our time. She’s the only journalist to have gotten an admission directly from W. Mark Felt that he was, indeed, Watergate’s “Deep Throat,” solving one of America’s greatest political debates. She has also worked as a network TV producer, as well as a staff writer on Saturday Night Live and other series.

• “The murder of President Kennedy remains unsolved over 58 years later. For those of us who continue to seek the truth, Dr. Wecht is our beacon and his latest book deserves your time and consideration.”–Alec Baldwin

• “Cyril Wecht and I bonded over our work on the JFK assassination, and later the RFK murder. This book proves how Cyril has never stopped fighting for justice.”—Thomas T. Noguchi, M.D.

• “When it comes to the assassination of President John F. Kennedy, few people have a better understanding of the medical evidence than my friend, famed forensic pathologist Dr. Cyril Wecht. This book by Wecht and his co-author Dawna Kaufmann illustrates his passion and inspiring perseverance in finding answers to one of history’s most enduring tragedies.”—Geraldo Rivera

• “I have the greatest respect for Cyril Wecht. He’s been on the front lines of uncovering the truth of the greatest murder mystery in American history. His exposure of the Warren Commission’s tortured single bullet absurdity, proves definitively that President John F. Kennedy’s assassination was the result of a conspiracy.”—Rob Reiner 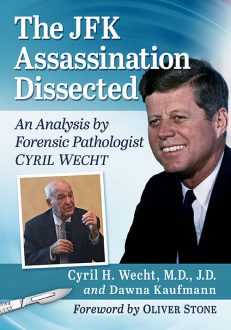 You're viewing: The JFK Assassination Dissected $29.95
Add to cart