A Glasgow Murder and the Young Woman Too Respectable to Convict

In 1855, Glasgow socialite Madeleine Smith began a flirtation with Pierre L’Angelier, a handsome clerk—for her a mere diversion. But L’Angelier sought social mobility. Their class disparity gave her control of the intrigue but when the relationship turned sexual the power imbalance shifted. Victorian authorities recognized irregular unions in certain cases. L’Angelier considered Smith his wife, a part she at first discreetly played. When he refused to step aside and allow her a more socially acceptable marriage, his removal became necessary. Smith’s sensational murder trial captivated both Britain and America. Despite compelling evidence of guilt, various factors lead to her acquittal—her class and gender, the peculiarities of Scottish law—and many believed the case went to trial only because the Crown feared blatant confirmation that justice was not blind.

A retired academic, Brian Jenkins is the author of nine earlier books, all set in the nineteenth century. He lives in Guelph, Ontario. 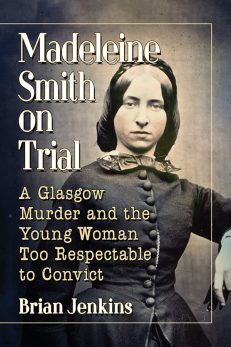 You're viewing: Madeleine Smith on Trial $39.95
Add to cart