The Criminal Life of Albert Anastasia

Umberto Anastasio, better known as Albert Anastasia, was an Italian-American mobster and hitman who became one of the deadliest criminals in American history and one of the founders of the modern American Mafia in New York City. For all-out savagery and ruthlessness, few other leaders of the Mafia worldwide have rivaled Anastasia, known to peers as “The Mad Hatter” and to journalists as “The Lord High Executioner.” After escaping a death sentence in 1921 and multiple other arrests for murder, he later served as director of the national crime syndicate’s contract murder department (“Murder, Inc.”) from 1931 until informers brought it down ten years later. By 1951 he led one of New York City’s Five Families, a post he held until his public barbershop assassination in October 1957.

This first-ever book-length biography of Anastasia traces the mobster’s life and the ripple effects his career had on the American crime world. The story also tracks his brothers and their families, while debunking certain widespread myths about their parentage, various deportations, trials, convictions, and eventual retirement from the mob, dead or alive.

Michael Newton is an award-winning author of numerous books on topics ranging from cryptozoology to civil rights and organized crime. He lives in Indiana. 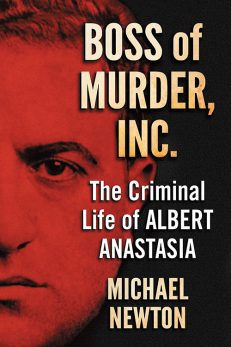