The Thames Torso Murders have been overshadowed by Jack the Ripper and his crimes, but were just as brutal and gruesome. They began in 1887 in London’s East End, just north of the Thames River in Rainham, England. The killer took one victim that year, another in 1888, and two more in 1889. He resumed his crimes in 1902, taking his last victim south of the Thames and leaving her body in a pile of dismembered parts as he had done with most of his other victims.
This work delves deep into the case of the Thames Torso Murders. It begins with a look at London in the late 1800s, a time of great confusion and tremendous population increase, and the killer’s path to London, which seems to include a murder in Paris in 1886. The book then examines in great detail each murder and the investigation that may have been hindered by the search for Jack the Ripper. It also raises the idea that Jack the Ripper and the Torso Murderer may have been the same man—Severin Klosowski, better known as George Chapman, the Borough Poisoner. It ends with an examination of Serial Killers; the Ripper, Torso, and Borough Poisoner murder cases; the search for clues to the serial killer responsible for the five Thames Torso murders; and Wolff Levisohn, a dark horse who seems to have known much about all three sets of murders, testified at Chapman’s murder trial, and then faded away as Chapman was sent to the gallows.

R. Michael Gordon is the author of several books, and has written extensively on Victorian London and the Ripper phenomenon. He lives in Long Beach, California.

SECTION I: The Road to Serial Murder

SECTION III: A Serial Killer and a Final Torso 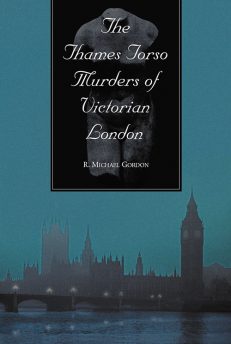 You're viewing: The Thames Torso Murders of Victorian London $29.95
Add to cart