Growing Up in a Smuggling Family

“You are about to enter a world of drug smuggling, drug greed, and drug murder.” With those words, the West Palm Beach assistant DA began the 1986 murder trial of Judy “Haas” McNelis. The only woman on the U.S. Federal Marshal’s 15 Most-Wanted List, she gained infamy as head of the “Haas Organization,” a reputed $267 million per year marijuana empire. But before her jet-set lifestyle as a drug “queen-pin,” Haas was simply a divorcée with two young children and a penchant for growing pot.
David McNelis’ candid memoir recounts his life with a brash, free-spirited mother determined to achieve success in the male-dominated world of international narcotics smuggling. A studious kid striving for normalcy, McNelis is thrust into an extraordinary adventure where dealers, smugglers, daredevil pilots, federal agents, hitmen, and even an accused KGB spy all become part of “normal” life.

Since his youth as a self-described “bookish Eagle Scout,” David Michael McNelis, author and avid outdoorsman, has been a professional musician, inventor, ship’s captain, world traveler, and teacher. He lives in Chandler, Arizona. 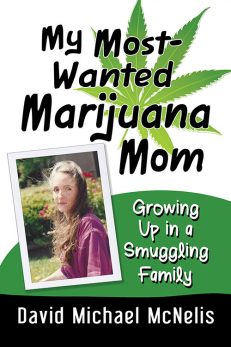 You're viewing: My Most-Wanted Marijuana Mom $19.99
Add to cart