A Memoir of Sex, Drugs and Crime in Boston’s Combat Zone

A hub of sex, crime, and drugs, Boston’s Combat Zone, the nation’s largest adult entertainment district during the last half of the 20th century, lured white- and blue-collar workers, lawyers, professors, judges and cops to watch and chat up its adult performers, many of whom earned more than white-collar professionals. By 1985, its multi-decade run was over. Why did it last so long, despite constant attempts to destroy it? What drew thousands of women to perform there, despite the potential for danger? And what became of them, after the lights dimmed and the music stopped?
This first comprehensive history of the Combat Zone authored by an active participant, is told through the gritty perspective of a Boston cab driver married to a star dancer. It introduces the district’s strippers, club owners, transgender performers, prostitutes and cops, depicting them as neither saints nor sinners as they fought for survival and success in a time of sexual revolution and political upheaval. This is their story, much of it told in their own words.

Geoff Alexander has authored two books on cinema and has written on musical subjects ranging from jazz history to flamenco. He is the founder and director of the Academic Film Archive of North America, in San Jose, California, the first archive solely dedicated to the history, preservation, and scholarship of the classroom educational film.

• We Weren’t Angels is a remarkably vivid, detailed account of Boston’s infamous Combat Zone which proves to be a compelling, seductive reading experience. Although non-fiction, in the capable hands of Geoff Alexander, it is as riveting as the best of fiction. Mr. Alexander gives us an eyewitness account and writes with the power and insight of a fine novelist. An utterly gripping and often unnerving landscape rich in detail written by one who was there. In his unflinching portrait of people and events, he spares no one including himself. Highly recommended!”—Dean Barrett, author, Hangman’s Point, Skytrain to Murder and Kingdom of Make Believe

• “In this tour-de-force of memoir and research, Geoff Alexander offers a unique view of Boston’s famed Combat Zone at its raucous height in the late 1970s into the 80s. He incorporates little-explored perspectives: not only those of the female dancers and male customers at the Zone’s many strip clubs, but also those of the district’s cab drivers (of whom he was one, while married to a dancer), transgender performers, club owners, talent agents, costume designers, bartenders, police detectives, mobsters, musicians, photographers, drug dealers, petty thieves, pimps, urban planners, and politicians. Meticulously researched, this book offers a panoramic and often disturbing view of the history of commercialized sex work in one of the most storied Red Light districts in the U.S. Some of us made it out with tales to tell (perhaps not to the grandchildren). Others fared much worse. We all come to life in this riveting, unforgettable telling of a quintessentially American tale.”—Lauri Umansky (as Lauri Lewin), author, Naked is the Best Disguise: My Life As a Stripper 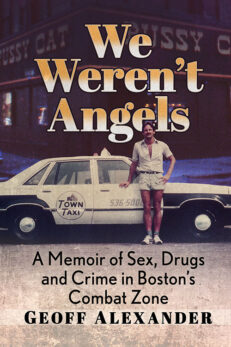