Strippers, zombies, fugitives and jewel thieves. These were just some of the characters who inhabited the weird, wild films of director Stephen C. Apostolof in the 1960s and 1970s. But Apostolof’s own life was every bit as improbable as the plots of his lurid movies. Escaping the clutches of the communists in his native Bulgaria, he came to America in 1952 and decided on a whim to reinvent himself as a Hollywood filmmaker, right down to the cigars, sunglasses and Cadillacs.
He produced a string of memorable sexploitation classics, including the infamous Orgy of the Dead. Along the way, he married three times, fathered five children and forged a personal and professional relationship with the notorious Ed Wood, Jr. Drawing on rare archival material and interviews with those who knew him best, this first biography of Apostolof chronicles the life and career of a cult film legend.

Jordan Todorov is a journalist and a filmmaker based in Berlin, Germany who directed Dad Made Dirty Movies (2011), a documentary about Stephen C. Apostolof. He writes for Atlas Obscura—an online compendium of “The World’s Wonders, Curiosities, and Esoterica.”

Joe Blevins is a freelance writer in Arlington Heights, Illinois. His work has appeared in The A.V. Club, Splitsider, Weekly Humorist, and Crooked Marquee, as well as his blog, Dead 2 Rights.

• “If you’ve never heard of Stephen Apostolof (aka A.C. Stephen) buckle in for one hell of a ride that takes readers from Bulgaria to Hollywood where Apostolof made some of the wildest films you’ve (probably) never seen. Blevins and Todorov have given proper scholarly attention to a pillar of the sexploitation genre!”—Mike White, The Projection Booth

• “An unashamed peek behind the faded, and often stained, velvet curtain that separates the shiny gloss of mainstream Hollywood and the smoky backrooms of exploitation cinema.”—Filmmaker Fred Olen Ray 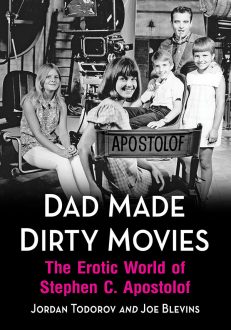