In 1975, Dr. Richard Charles Haefner had it all—a Ph.D. from Penn State University, a prestigious job offer with UCLA and a thriving family business. Then it all came crashing down. Two boys who worked for Haefner accused him of sexual molestation, but allegations of police brutality, prosecutorial misconduct, bribery and corruption soon overshadowed what seemed like an “open-and-shut-case,” ultimately resulting in the Pennsylvania Supreme Court’s amending state law. Drawing on interviews and recently discovered documents, the author revisits the case and explores a number of open questions—including whether Haefner was set up by police as he claimed.

Derek J. Sherwood is the author of 2011’s Who Killed Betsy? Uncovering Penn State University’s Most Notorious Unsolved Crime, which put forth Haefner as the prime suspect. While writing it, he uncovered many expunged documents and as a result he has spent the past decade researching Haefner’s 1976 molestation trial, which ended with a hung jury. The author lives in Emmitsburg, Maryland.

“A brutal deep-dive into Sherwood’s favorite suspect. Unflinching. Justice Perverted is the study of a predator who got away with terrible crimes and a broken system that allowed him to go free.”—James Renner, filmmaker and author of Amy: My Search for Her Killer and True Crime Addict: How I Lost Myself in the Mysterious Disappearance of Maura Murray. 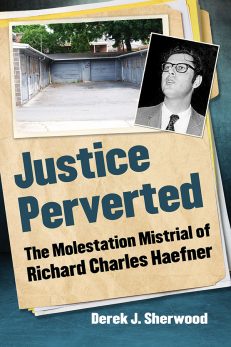