On December 7, 1864, just one week after the bloody battle of Franklin, Tennessee, William McGee, a drummer boy from Newark, New Jersey, was credited with leading a Federal force to a decisive victory over the Confederates in a clash just thirty miles from the carnage at Franklin. This 15-year-old Irish-American, on convalescent duty and acting as an orderly to General Lovell Rousseau, was recognized for the capture of two guns, several hundred prisoners, and the saving of Fortress Rosecrans in Murfreesboro from the famed Nathan Bedford Forrest.
For his actions, young McGee would soon be awarded a Medal of Honor, written up in newspapers and books as a glorious New Jersey legend, be commissioned as a lieutenant in the United States Army at age 18, and then, inexplicably at the height of his notoriety, virtually disappear from history for more than 100 years. This is the story of a lost war hero, a man-child with the world at his feet, whose fall from grace is accelerated by fame, lies, alcohol, bigamy, and murder.

Thomas Fox is a retired librarian from Fredon, New Jersey. He often speaks on both Irish emigration and New Jersey history. 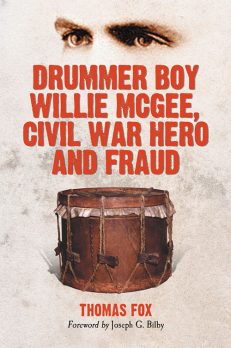