View cart “He Cheated, She Cheated, We Cheated” has been added to your cart.

Infidelity raises questions: Why do women stay with a cheater? Why do women cheat? Why do women become “the Other Woman”? How do past experiences with infidelity impact future relationships? Drawing on interviews with U.S. women of various ages, racial backgrounds, educational attainments, and sexual orientations, this insightful study examines their personal experiences of being cheated on, cheating, being the Other Woman, or some combination of the three. Always engaging and equal parts uplifting and dispiriting, their narratives range from all-too-familiar stories to unconventional perspectives on love, life, and interpersonal communication.

Ebony A. Utley, Ph.D. is a professor of communication studies at California State University–Long Beach. As an entrepreneur, she develops and consults on technologies to improve romantic relationships. She is also a certified yoga instructor who believes in the power of yoga to help women heal from trauma and infidelity.

Section One: I Was the Last to Know That My Partner Cheated on Me 9
Danielle: “It took several fights for him to understand the terrible position that he put me in.” 10
Janet: “You know about me and you’re okay with him having sex with both of us?” 12
Kathy: “When you’re married and you love someone you do not stop loving them because you find out today what they did yesterday.” 16
Willa: “I’ve had more STDs than Carter’s got pills and I have been with no one other than him.” 20
Stacey: “I always thought he would change, but being with him changed me.” 23
India: “A person who constantly accuses you is reflecting their guilt.” 28
Dee: “I can’t be a wife that allows my husband to openly have an affair.” 32
•  Understanding Public Infidelity Betrayal 39

Section Two: I Experienced “Infidelity Plus” 44
Elizabeth: “Affairs don’t happen to nice ­middle-class Jewish girls!” 45
Sam: “It was very frustrating to feel like I had paid for the social activities that led to her cheating on me.” 48
Teah: “He was playing Russian roulette with his health and mine.” 52
CeCe: “He had no control. He threw away everything for sex.” 55
Faye: “I was already suffering from his cheating, so I couldn’t imagine how bad it would be if I were cheating too.” 58
Marie: “I became a mad woman on this ­hell-bent quest to find out everything.” 63
Forsythia: “His violation of trust hindered my ability to trust my world.” 67
Seville: “As soon as I left, he was trying to get on top of her.” 71
Dot: “I fucked up my whole life over a person.” 74
•  Understanding “Infidelity Plus” 81

Section Three: I Cheated on My Partner 86
Frances: “I know it’s weird to say that I was in love with her and slept with someone else at the same time.” 87
Assata: “But I knew after I cheated on him that we would have to break up because I’m not really a cheater like that.” 90
Sue: “Once my husband caught me cheating, all of these complaints came out and there was no taking them back.” 93
Evelyn: “Right person, wrong time.” 95
Nicole: “Once you have an affair people think of you as the kind of person that can have an affair.” 97
Taj: “A part of me wanted to be caught so that it would force my husband to deal with our issues.” 100
Sofia: “I wish I felt guilty about how good that sex felt.” 102
Rosa: “To be honest, I’m not sure who my son’s father is.” 104
Jennifer: “There’s something about that feeling of sleeping with someone new that I just can’t seem to recreate in any other aspect of my life.” 107
Ayn: “It was the craziest four months sleeping with the both of them without either of them knowing.” 109
Fiona: “When I had a good closeness with a guy, I had sex with him just to keep him around.” 112
Tracy: “I was trying my best to not cheat on this boyfriend, but there’s something about my personality that just loves to push boundaries.” 114
Cree: “That convention was a complete vacation from my life. I didn’t want it to stop.” 116
•  Understanding the Unfaithful 119

Section Four: I Was the Other Woman 123
Sasha: “It started with explicit text messaging that detailed all of the things that he wanted to do to me.” 124
Lita: “I think regret is a stupid emotion, so I never regret the things that I have done.” 127
Elle: “Did I just accidentally become someone’s mistress?” 130
Barbara: “I knew that playing hard to get made him want me more.” 133
Brenda: “I don’t like how I feel about what I’m doing to her.” 136
Sadie: “I think he wanted me to be envious of his wife’s life.” 138
Raven: “If we’re going to do this, it’s only your wife and me.” 140
Xeena: “I was doing my best friend.” 143
Sheva: “If all of us are in the same bed together, everybody needs to know what’s going on.” 146
Denise: “If you are in so many different relationships with people who aren’t yours to be in a relationship with, it’s never going to work.” 148
Ferris: “We often have sex in the same bed that they sleep in.” 153
Adriana: “Even now as I allow myself to rehash the memories of having sex with him, I still feel that throbbing and aching need for him.” 157
Tru: “If someone came to me with a crust of bread, I would’ve treated it like a gourmet meal.” 159
•  Understanding the Other Woman 163

Section Five: We Cheated on Each Other; It’s Complicated 167
Ishtar: “My husband confessed that he had a lot of fantasies about me being with other men.” 168
Julie: “You can’t have a girlfriend and a wife.” 170
Anne: “Basically, we had an open marriage, I just didn’t know it.” 175
Melanie: “I want to try to love myself more so that I’m strong enough to leave him.” 178
Florence: “Being unfaithful helped me get free.” 184
Symone: “Overall, I was as faithful as I could be.” 186
Lindsay: “Two weeks after that, we told our spouses what we had done, left our marriages, and have been together ever since.” 190
Jane: “We each had an affair that we talked about with each other.” 194
•  Understanding “It’s Complicated” Infidelity 195

Section Six: I’ve Experienced Multiple Aspects of Infidelity in Multiple Relationships 199
Sandra: “I knew logically in my mind that it was absurd to be talking to my girlfriend’s lover.” 200
Thumbalina: “It wasn’t as hard as I thought to be honest with myself about myself.” 204
Antoinette: “Every time a man professed his love for me, it turned out to be a lie.” 208
Coco: “Sex is sex. I just liked the pleasure of it. You’re not supposed to feel bad about it.” 211
Ava: “I’ve been unfaithful due to the fact that I feel like it’s already going to get done to me.” 214
Ebony: “There was a lot of pain in my childhood and I’ve indulged in a lot of personal pleasures to hide that pain.” 219
Sherry: “He made sure no other man would ever want me again.” 225
•  Understanding Multiple Experiences with Infidelity 228 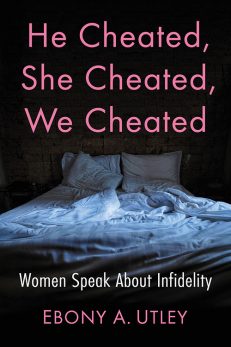 You're viewing: He Cheated, She Cheated, We Cheated $39.95
Add to cart