A Worldwide History Since 1566

Strange behaviors and illnesses in students are examined through the centuries. Possessed children went into trance states and began to bark like dogs in 16th and 17th century Holland; an epidemic of twitching, trembling and blackout spells swept through European schools during the latter 1800s; an outbreak of Tourette’s-like symptoms struck schoolgirls in western New York in 2011-12. In addition to the US and Europe, separate chapters detail accounts from Asia, Africa, Latin America and Oceania. A variety of theories to explain outbreaks are examined.

Robert E. Bartholomew has taught sociology in Australia at The Flinders University of South Australia and James Cook University in Queensland. A former radio journalist and contributor to the Associated Press and United Press International, he teaches at Botany College in Auckland, New Zealand.

Bob Rickard founded Fortean Times, a monthly periodical for balanced reporting and discussion of anomalies in most fields, including those studying behavior, experience and belief, in late November 1973 and edited it for the next 28 years. He continues to contribute research, articles and reports on unusual topics in his semi-retirement. He lives in London, England.

4. The Demon-Haunted Classroom: Tales from Asia 71

5. The Students Who Laughed for a Week: Accounts from Africa 94

6. The Meowing Schoolgirls of Fiji: Accounts from the Islands 121

8. Strange Schoolyards and Unusual Field Trips: Cases from Beyond the Classroom 146

“This historical metaanalysis provides an invaluable, accessible medical and sociological perspective on what continues to be a very common occurrence: mass hysteria among schoolchildren worldwide…an engaging and informative read…a thoroughly entertaining book”—ForteanTimes. 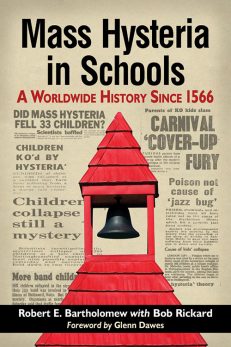 You're viewing: Mass Hysteria in Schools $29.95
Add to cart