A Study of Mass Psychogenic Illness and Social Delusion

“For a two week period in 1956, residents in the vicinity of Taipei, Taiwan, lived in fear that they would be the next victims of a crazed villain who was prowling the streets and slashing people at random with a razor or similar weapon. At least 21 victims were reported during this period, mostly women and children of low income and education.” A thorough investigation revealed however, that: “five slashings were innocent false reports, seven were self-inflicted cuts, eight were due to cuts rather than razors, and one was complete fantasy.”

This is one example of many cases of what has traditionally been called “mass hysteria” that are examined in this comprehensive study of human beings’ fear of the unknown. Beginning with a concise history of mass hysteria and social delusions, the author differentiates between the two and investigates mass hysteria in closed settings such as work and school, and mass hysteria in communities with incidents such as gassings, Pokémon illnesses in Japan, and medieval dance crazes. Also examined are collective delusions, with information on five major types: immediate threat, symbolic scare, mass wish fulfillment, urban legends and mass panics. The book ends with a discussion of major issues in the area of mass hysteria and a look toward the future of this intriguing subject.

Robert E. Bartholomew has taught sociology in Australia at The Flinders University of South Australia and James Cook University in Queensland. A former broadcast journalist and contributor to news organizations such as the Associated Press and United Press International, he currently teaches at Botany College in Auckland, New Zealand. 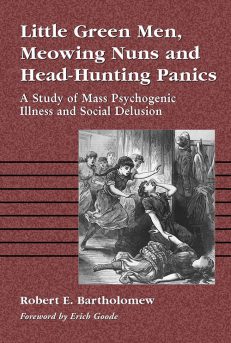