A son of Serbian immigrant parents, Indiana State Police Captain Matt Leach led the hunt for John Dillinger during the violent mid–1930s that came to be known in the Midwest as the era of the Public Enemy. Pushing a media campaign aimed at smoking out the fugitive, Leach elevated Dillinger to unprecedented notoriety. In return, Dillinger taunted him with phone calls and postcards, and vowed to kill him—a threat he never executed.

Leach’s use of publicity backfired, making him a pariah among his fellow policemen—many were suspicious of his tell-all approach to crime fighting. The FBI ordered his firing in 1937 for challenging their authority. After returning to private life and serving in Europe during World War II, Leach planned to write a book challenging the FBI’s version of Dillinger’s final months. He died in a car accident in 1955, right after a meeting with his publisher.

Dillinger researcher Ellen Poulsen is the author of a book on the women of the John Dillinger gang. She lives in Queens, New York.

Lori Hyde has researched police tactics of the 1930s for more than forty years, and created websites about Depression-era desperadoes. She lives in Corunna, Indiana. 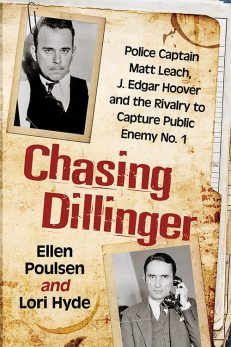