The News from Whitechapel

Jack the Ripper in The Daily Telegraph

“Early yesterday morning a horrible murder was discovered in Buck’s-row, a narrow passage running out of Thames–street, Whitechapel.”—The Daily Telegraph, Saturday, 1 September 1888.
This text is an annotated transcription of the articles that detailed the Jack the Ripper murders as they were reported by The Daily Telegraph, the world’s largest-selling daily newspaper in 1888. Providing explanations where needed, each chapter is devoted to one of the Ripper’s victims through transcripts of The Daily Telegraph coverage of her murder, its investigation and subsequent inquest. Interspersed with the transcripts are footnotes (the contents of these are drawn from Home Office and Metropolitan Police files, past and present Ripper books, other contemporary newspaper reports, and the authors’ research) that serve to correct what the newspapers got wrong, expand on certain points, or explain to the reader things that were common knowledge during this time period. Also included are rare illustrations including a previously unpublished photograph of victim Annie Chapman prior to her death.

Alexander Chisholm, an historian and the author of numerous articles on Jack the Ripper, lives in Scotland.

Dave Yost has written several articles and essays for the Ripperologist and RipperNotes. He lives in Ambridge, Pennsylvania.

“Most books about Jack the Ripper give the author’s opinion with regards to the suspects; this one gives you the chance to read what the citizens of London read each morning…wonderful footnotes…extensive bibliography and index…interesting…original images from the paper are included…an amazing resource”—Reviewing The Evidence 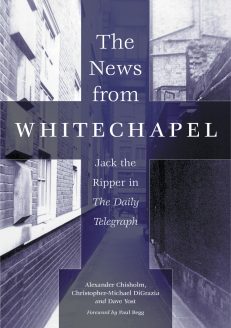 You're viewing: The News from Whitechapel $29.95
Add to cart