The Prince, His Tutor and the Ripper

The Evidence Linking James Kenneth Stephen to the Whitechapel Murders

Of the many attempts to discover Jack the Ripper’s identity, few omit the name of James Kenneth Stephen, tutor to Queen Victoria’s eldest grandson, fondly known as Prince Eddy. While Stephen superficially fit the profile investigators established, was he really capable of the demented violence perpetrated by England’s most famous serial killer?
This volume takes an in-depth look at the life and experiences of James Kenneth Stephen, examining the relevant evidence and attempting to determine whether or not Stephen could actually have been involved in the Ripper murders. Delving into what little is known of Stephen’s early years, the work discusses his relationship with his mother and his family’s struggle with a hereditary mental illness. It follows him through his formative years at Eton, which he considered his true home and where he was introduced to the Greek notion of homosexuality. The work’s primary focus is Stephen’s relationship with Prince Eddy, who also became a suspect in the infamous London murders. The way in which Stephen’s life intertwined with those of Prince Eddy and Montague Druitt, another Ripper suspect, is examined in detail. Other incidents of the fateful fall of 1888 and Stephen’s final surrender to mental illness are also discussed. Appendices contain Stephen’s poetry and details regarding his family ancestry.

Appendix I: “The Littlego (Air Kaphoozelum)” by James Kenneth Stephen      207 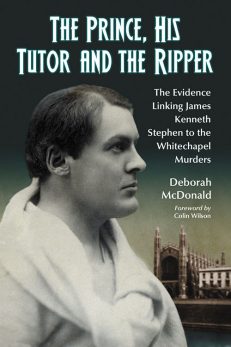 You're viewing: The Prince, His Tutor and the Ripper $29.95
Add to cart