The Trial of Emma Cunningham

Murder and Scandal in the Victorian Era

The alleged 1857 murder of a wealthy Bond Street dentist by Emma Cunningham, a mature widow he was believed to be sexually involved with, served to distract many New Yorkers from the deepening national crisis over slavery in the United States. Public anxieties seemed well founded—domestic murders committed by women were believed to be increasing sharply, jeopardizing society’s patriarchal structure.
The penny press created public demand for a swift solution. The inadequacy of the city police, complicated by the state’s decision to install a new force, resulted in the rival forces battling it out on the streets. Elected coroners conducting inquests, and elected D.A.s prosecuting alleged culprits, fed a tendency to rush to judgment. New York juries, all men, were reluctant to send a middle class woman to the gallows. At trial, Cunningham proved a formidable and imaginative member of the so-called weaker sex and was acquitted. This reexamination places the story in its social and political context.

A retired academic, Brian Jenkins is the author of ten earlier books, all set in the nineteenth century. He lives in Guelph, Ontario.

6. In the Court of Public Opinion

7. The Case for the People

9. The Response to the Verdict

11. The Question of Guilt 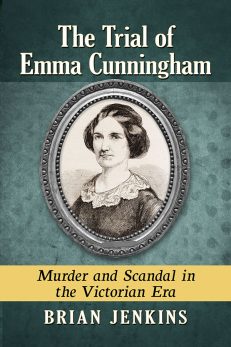 You're viewing: The Trial of Emma Cunningham $29.95
Add to cart