On a summer day in 1898, a family in Dover, Delaware, shared a box of chocolates they received in the mail from an anonymous sender. Within days, two of the seven family members were dead; the other five became ill but recovered. The search for the perpetrator soon moved from Delaware to California, where a suspect was quickly identified: Cordelia Botkin, lover of the husband of one of the poisoned women. This book chronicles the shoddy investigation that led to Botkin’s indictment and the two sensational trials, adjudicated in the press, that found her guilty. National attention was drawn by the cross-country nature of the crime and the fact that the supposed perpetrator had never been in Delaware in her life. It was also a trial over what was viewed as the moral and sexual depravity of the two main participants, Botkin and Dunning (the husband), with most of that criticism directed at Botkin.

Cultural historian Kerry Segrave is the author of dozens of books on such diverse topics as drive-in theaters, ticket-scalping, lie detectors, jukeboxes, smoking and shoplifting. He lives in British Columbia. 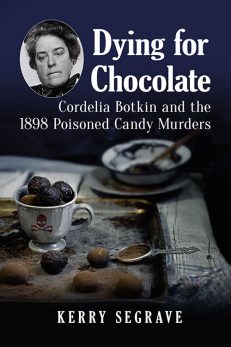 You're viewing: Dying for Chocolate $19.99
Add to cart