The Ripper’s Victims in Print

The Rhetoric of Portrayals Since 1929

Mary Ann Nichols, Annie Chapman, Elizabeth Stride, Katherine Eddowes and Mary Jane Kelly—the five known victims of Jack the Ripper—are among the most written-about women in history. Hundreds of books on the Ripper murders describe their deaths in detail. Yet they themselves remain as mysterious as their murderer.
This first ever study of the victims surveys the Ripper literature to reveal what is known about their lives, how society viewed them at the time of their deaths, and how attitudes and perceptions of them have (or have not) changed since the Victorian era.

Rebecca Frost is an independent scholar and freelancer. She lives in L’Anse, Michigan.

Four • Royals, Freemasons and Schemes: Presenting Victims in the Conspiracy Theories
of the 1970s 59

Five • One Hundred Years Later: Writing for the Anniversary of the Crimes 77

Seven • More of the Same? An Introduction to the 21st Century Books 146

Nine • Crimes for a New Age: Variations and Changes in Victim Representation of the
21st Century 188

Conclusion: What Possible Use? 207 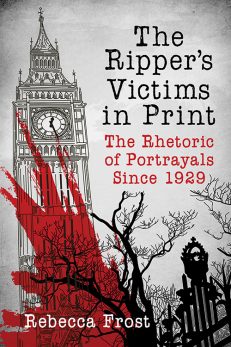 You're viewing: The Ripper’s Victims in Print $29.95
Add to cart