Over 13 months in 1976­–1977, four children were abducted in the Detroit suburbs, each of them held for days before their still-warm bodies were dumped in the snow near public roadsides. The Oakland County Child Murders spawned panic across southeast Michigan, triggering the most extensive manhunt in U.S. history. Yet after less than two years, the task force created to find the killer was shut down without naming a suspect. The case “went cold” for more than 30 years, until a chance discovery by one victim’s family pointed to the son of a wealthy General Motors executive: Christopher Brian Busch, a convicted pedophile, was freed weeks before the fourth child disappeared. Veteran Detroit News reporter Marney Rich Keenan takes the reader inside the investigation of the still-unsolved murders—seen through the eyes of the lead detective in the case and the family who cracked it open—revealing evidence of a decades-long coverup of malfeasance and obstruction that denied justice for the victims.

Marney Rich Keenan is an award-winning reporter and columnist, recently retired after 26 years with The Detroit News. She lives in Bloomfield Hills, Michigan.

• “Each chapter reads like an in-depth newspaper article, and while the shifting time periods can be confusing, this is a page-turner nonetheless. Readers will ache for the family members of Mark Stebbins, Jill Robinson, Kristine Mihelich, and Timothy King, and be outraged at the incompetent and seemingly petty divisiveness of the investigators. …A moving, well-crafted narrative for true crime buffs.”—Library Journal

• “This has got to be the most in-depth and complete account of the Oakland County Child Killer murders published to date and the details are woven together expertly. For 10 years, Marney Keenan followed each strand of this story, laying out the complexity in this meticulous, haunting narrative. In turns saddening, maddening and addictively intriguing, it almost reads like a hallucinogenic dream with an unparalleled cast of characters: at the end, one wonders if it’s possible that law enforcement could both participate in a cover-up and try relentlessly to uncover the truth. For the families of the victims, that crux must be the stuff of an endless living nightmare.”—Tracy Ullman, Executive Producer, NBC News Studios

• “Keenan has written a true crime epic that will remain with the reader long after the last page has been turned.”—Michigan in Books 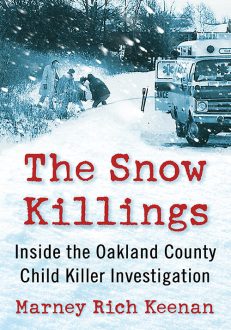