Media and the Marketing of National Panics

National panics about crime, immigrants, police, and societal degradation have been pervasive in the United States of the 21st century. Many of these major fears begin as mere phantom fears, but are systematically amplified by social media, news media, bad actors and even well-intentioned activists. There are numerous challenges facing the U.S., but Americans must sort through which fears are legitimate threats and which are amplified exaggerations.
This is an examination of the role of fear in national panics. Simultaneously, the book addresses why many Americans believe the country is in horrible shape and will continue to deteriorate (even in the face of contradictory evidence). Political polarization, racism, sexism, economic inequality, and other social issues are examined using an interdisciplinary approach. Combining media literacy, folklore, investigative journalism, psychology, neuroscience, and critical thinking approaches, this book reveals the powerful—and often unrecognized—role that fear plays in clouding perceptions about the U.S. It delves beneath the surface to look at not only the negative repercussions of this pervasive and toxic phenomenon, but also offers evidence-based solutions.

Benjamin Radford is deputy editor of the science magazine The Skeptical Inquirer. The author of several books, he has also written numerous articles on a variety of topics including urban legends, the paranormal, critical thinking, films, and media literacy. He has appeared on CNN, the History Channel, and the National Geographic Channel. 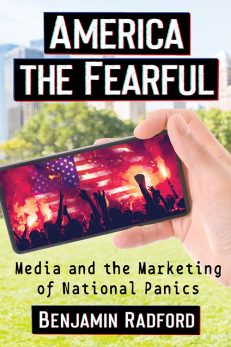 You're viewing: America the Fearful $29.95
Add to cart