View cart “The Radio Burglar” has been added to your cart.

In the midst of gangland activities during the Roaring Twenties, a thief plagued the New York City area by breaking into people’s homes and stealing radios, possibly the costliest thing a family could own. Not only did the crimes deprive families of property and security, but they also resulted in the injuries of three NYPD officers and the death of officer Arthur Kenney.

Based on interviews and trial transcripts, this book documents the search for the Radio Burglar, which turned into a wide-spread manhunt. Initially perplexed by the case, authorities eventually overcame great odds to achieve a conviction that has received praise in the following decades. But nine years later, the devastating effect on his family and friends of Arthur Kenney’s loss was prolonged when they were involved in a second murder trial that riveted the attention of the city and country.

John T. Aquino is an attorney, journalist and author in Silver Spring, Maryland. He has served as editor of three national trade magazines, has written several trade books, short stories, and over 4,000 bylined articles for newspapers, magazines, newsletters, and websites on entertainment law, intellectual property law, and other issues. He is a member of several state and federal bars, and the National Press Club and the Mystery Writers of America. 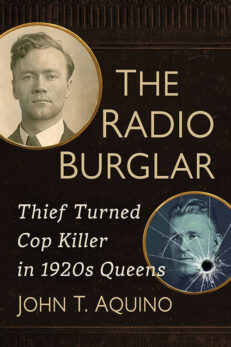